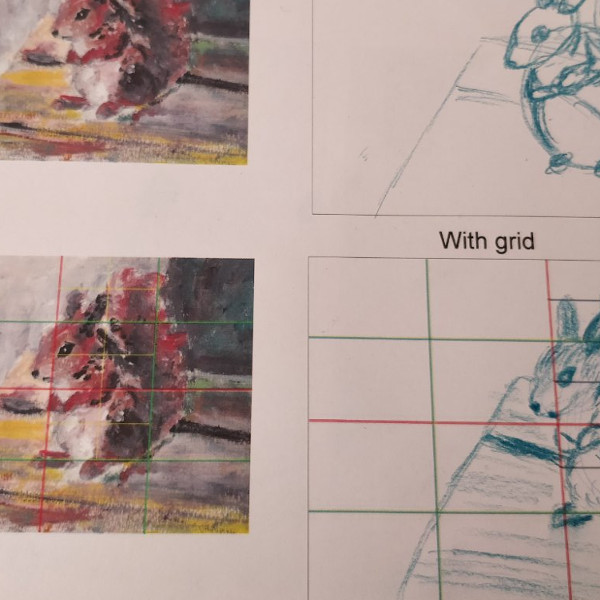 As a person that practices both art & computer science, I have found there can be an interaction between the two, where ideas and patterns from one discipline can be transferred in a new form into the other.

I have created a workshop that introduces ideas about what is important in drawing and what are the steps to creating a picture using terminology familiar to people in tech.

The workshop consists of some theoretical parts and hands-on exercises, aided by a custom tool. Exercises include drawing cylinders from several angles while being aware of the 3d shape of the object, using a custom grid to copy a sketch and doing several iterations of thumbnails to explore an idea for a drawing. All the while, feedback and suggestions are offered to the participants.

Amazing drawing workshop at #socratesCH - I was amazed what even I could accomplish in such a short time@_sandtweets pic.twitter.com/onKwRDHMPH

The end outcome is that participants gain more confidence in their drawing abilities, go deeper into drawing even simple forms and understand that the underlying process for drawing is not a magical fuzzy path, but consists of many sequential and ‘deterministic’ steps.

I ran the workshop for the first time in the Mozilla Festival in October 2017 in London, and since then, I have ran it also at the 34c3 in Leipzig and several times in Switzerland. I have experimented with various formats and faciliation modes, and have found that the workshop works best with a limited number of people (up to 20), but can expand to fill all available time because there’s the potential to go deeper into the exercises I have designed.

You are welcome to reach out to me if you want to book me to lead the workshop in your company/team, as part of an offsite or other event. (carolinegr@gmail.com)

And some more tweets :)

Lovely workshop to nurture our programmer and artistic soul by @_sandtweets https://t.co/c3apJipAfu

Learning how to draw squirrels? ✅ Thanks @_sandtweets for the great programming-drawing session at #MozFest !! pic.twitter.com/HzoLX9XTOi